Welcome to the Shepherd's Crossing Wiki 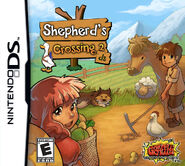 Below are the stylized portraits of characters present in Shepherd's Crossing 2 on the DS. When the player progresses in the game and meets/speaks with the villagers, these portraits appear in cutscenes, and text boxes are used over the portrait to deliver dialogue options. Each villager has their own background, family, and opinions (especially strong opinions about the player character!)

Community content is available under CC-BY-SA unless otherwise noted.
Advertisement